A Photo Worth Saving

The following article was written by our son. We hope you enjoy it!

During my younger days, railroad photography was quite the hobby for me. As much as I would have liked to aspire to heights of Richard Steinheimer and Ted Benson, my work was amateur at best. I was really interested in capturing the 3 quarter view roster shot of locomotives or freight cars for modeling purposes. However, I still would snap action photos, and did my best with composition while trying to capture the "point in time" consists.

My film of choice became slides. Kodachrome 64 was preferred, but would also shoot Ektachrome or Fujichrome depending what was available. I tried to keep the film speed low (64 or 100 was preferred) in hopes of keeping film grain as small as possible.

But, there were those times that I would get rebellious and go for 200 or even 400 speed films in hopes of capturing even more images. But at times, a heavy price was paid for that convenience. 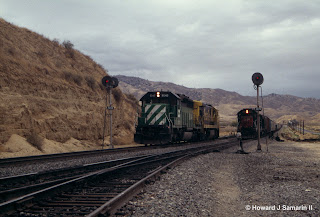 Take the above photo for example. Take back in April of 1997, it shows a westbound Santa Fe helper set, lead by Burlington Northern SD40-2 #8040, splitting the block signals at Bena siding in the famed Tehachapi mountains. They are passing an eastbound Southern Pacific train that has just had it's helpers added to the rear, and is about to begin the ascent up the mountain.

Back in 1997, this was a ho-hum shot. Nothing spectacular, other than a BN unit in helper service, taken on a cloudy day.

Fast forward to today, some 23 years later, and the shot now has some historical significance. As we know, both railroads are no longer around, having been merged into larger class 1 roads. The locomotives are mostly gone, Bena siding has been ripped out, and manned helpers have given way to remotely controlled DPU helpers.

While the above photo has content significance, the technical side of the photo is a disaster. Taken with high speed film, there is significant grain showing. Plus at the time, by camera equipment wasn't the best. Thanks to the available lighting at the time, the photo is dark and flat.

Looking to see what could be done to help this photo out, I first started by scanning the slide using my Plustek scanner and Vuescan software. It was scanned at 3600 dpi into a TIF file with just a few small Vuescan adjustments.

Looking at the raw TIF file, I knew I had my work cut out for me, with the biggest issue being film grain and noise. So I did some research on the internet, and DeNoise AI by Topaz Labs kept coming up in various photography forums as a really good denoise filter.

Did some research on the Topaz Labs website, and they offer a number of plugins to PhotoShop, in addition to a updated all in one software called Topaz Studio 2. You can try out their software for 30 days free, so I took them up on their offer. 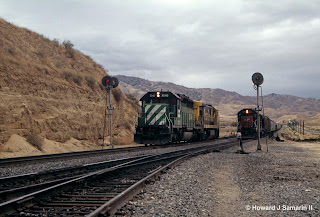 The above photo shows my results. It's better, and in my opinion presentable now. But what is really amazing, at least for me, is how well Topaz Studio 2 did using the built-in AI Clear filter. It did a good job at reducing noise while adding some sharpening. The modified photo was then re-exported out to a TIF, and brought into PhotoShop Elements for exposure and color corrections.

My reality is that I have many more slides like this with noise and grain problems. While the photo quality isn't that great, the content is, and therefore worth saving. All photos have value as it captures a point in time that in just about all cases, can not be recreated. Thanks to this workflow, it looks like I now have a path to improve those technically less than ideal photos.